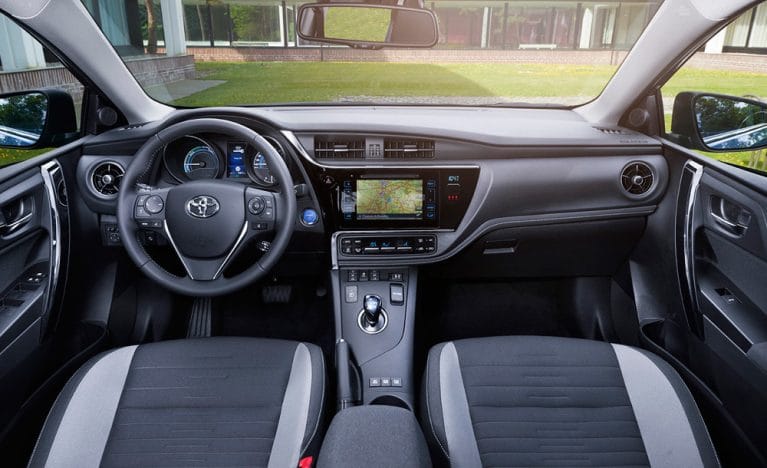 Technology not only surrounds the car but also grows exponentially. Accessing innovations that apply to vehicles can help make driving safer and easier.

Not only high-end cars incorporate these technological options but also models of generic brands. These elements have evolved in such a way that many drivers consider them essential when purchasing a car. Let’s see what they are.

Also called Lane Keeping Assist, this system alerts the driver if he leaves the lane in which he is traveling without first connecting the turn signals.

This system can work in two different ways: some manufacturers opt for two line-following sensors, one on each side of the vehicle, on the front bumper, capable of recognizing the lines of the road.

Other manufacturers, such as Toyota, also incorporate it through the Safety Sense package, which includes a set of active technologies called LDA. In this case, its operation is through a camera located at the top of the windshield, in charge of recognizing the lines that mark the lane in which we are driving.

One of the most useful technologies that have been launched on the market and increasingly widespread.

Most of the accidents that take place on the road are caused by side impacts. To avoid this type of accident, there is the blind spot detector, whose purpose is to avoid a collision by alerting the driver, visually and acoustically , if there is another vehicle outside of our vision change, that is, in the blind area that the rear view mirror does not show us.

This system is available from Toyota through Toyota Safety Sense equipment.

Also known as “reversing cameras” or “security cameras”, it has the great advantage of allowing the driver to see objects and people behind their vehicles .

This element greatly facilitates maneuvering, thanks to the fact that it shows the rear of the vehicle on a screen. Said camera can include sensors , which warn of the presence of obstacles by means of beeps .

Other options go further, offering a 360-degree vision camera, with everything that happens around the perimeter of the vehicle .

More and more manufacturers are choosing to include this system that has become widespread among car brands. Its operation is based on applying the maximum pressure in the brake circuit , while there is an emergency situation, so that the braking distance is the minimum possible.

The most sophisticated systems emit visual and acoustic signals in the event of a possible collision, reaching full braking if the car does not work. This is the case of Toyota within the PCS pre-collision system.

This practical device, which reflects the information on the windshield, has its origins in aeronautics, as we pointed out when analyzing its practicality and origin.

Thanks to systems like this, we can concentrate our eyes on the road , while we read the speed at which we are circulating or the navigator’s indications, among other information.

Toyota have an advanced color Head Up Display, which also allows you to customize some values, such as height or intensity , so that they can be adjusted at will of the driver.

There are more and more mid-range cars that incorporate this system, which through a camera located near the interior rear-view mirror, processes the images of the road and shows certain traffic signs on the instrument panel screen or through the Head Up Dislay. .

Toyota contemplates the assistance of traffic signals, through the Toyota Safety Sense program, providing information to the driver such as the current speed limit or overtaking restrictions, on a color TFT screen. In addition, the system warns with visual and audible indications, when the signaling is not respected.

This system is very useful, since you can get rid of a fine . Although beyond the financial fine, experts insist on emphasizing that the increase in maximum speed is directly proportional to the risk of suffering an accident .

One of the essential elements for traveling in the car is the provision of good lights. For this reason, lighting is one of the technological systems that are having the most advances in recent times.

And now the vehicles have smart lights, which thanks to a series of radars, are capable of detecting when a car is in front or in the opposite direction, turning the high-beam lights on and off automatically. They are even capable of controlling the brightness of public lighting, in the case of the intelligent control of high beams, which Toyota mounts under the acronym AHB, as part of the Toyota Safety Sense package.

Intended for those who travel frequently or move around the city a lot , the navigation system is a success when it comes to moving safely and accurately.

This element uses GPS (Global Positioning System) technology, to know our exact location – expressed in coordinates – which are translated to a specific point on the map by cartography. Whereas, the navigation software installed on the device is what allows us to enter the address of our destination and draw the ideal route, according to our criteria. Also, it provides in real-time the necessary indications to follow the proposed itinerary and, in case of error, reconfigure the route with the necessary modifications.

In the case of Toyota, it has a navigation system with a touch interface, capable of providing traffic information in real-time. You can also connect to the Internet through your smartphone, to help you find a destination. You can even search for locations from your home and send them to the vehicle so that it is ready when you start the trip.

An interesting option that allows us to charge our mobile devices without the need for cables. These wireless charging points are becoming more and more widespread in the car. Although most devices that support this feature carry Android operating system , Apple already plans to allow its devices to allow wireless charging from next year .

Toyota has wireless charging available for the smartphone, which allows us to charge our smartphone simply by placing it on a charging platform.

Undoubtedly, one of the most widespread technologies and practically a mandatory acquisition if we have Bluetooth in the car. These voice assistants allow you to answer messages, make and answer a call, as well as control various functions, without having to take your hands off the wheel.

Tires and safety: seven keys to keep in mind
If your car is jerking, these may be the main reasons
Shock absorbers, everything you wanted to know and did not dare to ask
The car is leaking oil, what can I do?