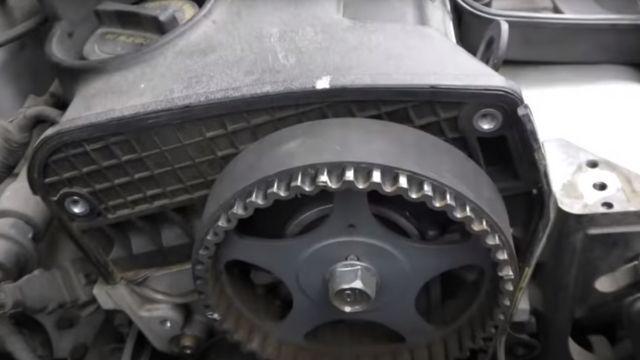 It makes no difference whether your vehicle is a diesel or gasoline engine. It is very likely that your engine is equipped with a timing belt

. As it is a wear component of the engine, this belt must be replaced in time. Failure to do so puts your engine at risk of catastrophic failure.

This simple component ensures that all engine components work in perfect synchrony with each other.

Some engines are equipped with a timing chain that, in most cases, should last for the life of the vehicle.

What Does A Timing Belt Do?

The main purpose of a timing belt is to provide a connection between the crankshaft and the camshaft of an automobile.

When it comes to adjusting these components for optimum engine performance, the timing belt plays an important role.

A faulty timing belt can cause catastrophic engine damage, which underscores the importance of keeping the timing belt in optimal operating condition.

Examine the belt as part of any regular maintenance and be sure to change it at the manufacturer’s suggested intervals.

When a belt fails prematurely, it is critical to identify why the belt is failing prematurely and what corrective action should be taken as soon as possible.

Most of the time, the cause of this failure is a problem in one of the drive components.

Symptoms of a Bad or Failing Timing Belt

The timing belt of a vehicle makes it possible for the crankshaft and engine to rotate synchronously and for the cylinders to fire at the right time during combustion.

It is usually made of high-quality rubber reinforced with nylon to increase its durability. However, its service life is limited and it should be replaced as soon as possible.

When is it necessary to replace the vehicle belt? Although each manufacturer sets its own deadlines, there are a number of signs that suggest that a product is beginning to “die” and that it is therefore time to replace it.

1. Ticking Sound From The Engine

When the timing belt wears out, it can cause a small noise in the engine, a “ticking” sound.

This sound may also be due to low oil pressure or lack of lubrication, but it is still advisable to take the vehicle to the mechanic.

An engine that won’t start is another timing belt problem. The timing belt is vital to starting an engine.

However, there are many reasons why your engine may not start. If your car won’t start, you may need a new battery, alternator, fuel pump, or starter motor. Many additional factors can cause your engine not to start.

3. Oil Leak Near The Motor

It is common for the engine to leak oil through the drive belt of the car, which is a typical occurrence.

It is also possible that the seal between the impeller and the belt has lost slack, that there are fractures in the seal, or that the belt is not properly installed on the engine.

Almost any of these circumstances will cause the engine to overheat and the belt to wear prematurely.

4. Smoke from the engine or exhaust

A damaged timing belt may be the cause of excessive smoke coming out of your vehicle’s exhaust pipe.

5. Rough Idling of the Engine

Timing belts have teeth that grip the gears as they turn different parts and components of the engine. The timing belt will begin to slip if these teeth begin to break or become brittle.

The teeth will then fall directly onto the gears, causing the engine to shake. Worst of all, the engine will stall due to improper camshaft timing.

When Should A Timing Belt Be Replaced?

The timing belt wears out over time. Although it rotates at high speed, it is exposed to continuous friction and high temperatures.

The recommended maintenance interval varies from vehicle to vehicle because the belts are subjected to various stresses and their construction can vary.

Some years ago, it was common practice to change timing belts at intervals of less than 90,000 miles.

Some classic sports cars, such as the Lancia Thema Ferrari 8.32, had timing belts that had to be replaced every 40,000 miles driven. Today, the suggested replacement interval is about 100,000 miles.

How to Check Timing Belt

There are several indicators that a timing belt is worn. If you notice any (or many) of the symptoms listed below, you should replace it immediately.

The first symptom of a worn timing belt is a lot of smoke coming out of the exhaust pipe.

Also, if the vehicle does not start immediately or makes squealing sounds, the belt may be worn.

A peculiar squeaking or hissing sound in the belt area may also be related to a lack of tension.

The engine rattles and the car shakes when the timing belt fails. Remember that the timing belt is intended to synchronize the valves and pistons, and when it fails, shaking occurs.

Depending on your vehicle, timing belt repair can become a major, time-consuming and expensive task. In most cases, replacing a timing belt before it breaks will cost between $500 and $1,000, while waiting until it breaks and replacing it can cost upwards of $2,000 or more.

Especially if additional damage has occurred as a result of the procedure.

How Long Does It Take To Replace A Timing Belt

Replacing your vehicle’s timing belt can be a costly repair. Depending on the vehicle, it can take anywhere from 4 to 8 hours to complete this complex and laborious procedure.

However, in the long run, changing the timing belt before it fails can prevent engine damage and save you money in the short term.

How To Change Timing Belt

The following are the steps to be performed by a workshop professional to replace a timing belt:

It will produce a ticking sound in front of your car when the faulty timing belt starts to wear and fail.

Can I Replace The Timing Belt Myself?

It is recommended that the timing belt be changed by trained professionals. In any case, if you have the necessary tools and time, you can change the timing belt yourself by following the step-by-step instructions above.

How Often Do Timing Belts Break?

Each manufacturer has its own recommendations, but the timing belt should be changed every 60,000 to 100,000 miles, depending on the vehicle.

The suggested interval for your particular vehicle can be found in the owner’s manual for that vehicle.

Keeping in mind that the timing belt is composed of rubber, it will eventually wear out and break.

Because of the critical role the timing belt plays in the proper operation of the vehicle, it is essential to adhere to the manufacturer’s recommended maintenance schedule because, as stated above, timing belt failure can result in a serious failure requiring engine replacement.

You should now be able to recognize the signs of a timing belt failure, the symptoms of improper timing, and the proper procedure for replacing the timing belt.

When it comes to replacing the timing belt, it is essential to carefully follow the manufacturer’s instructions, which are usually detailed in this article.

Performing this procedure requires great care, as the operator must ensure that the movements of all valves and pistons are coordinated, in order to prolong the life of the engine.