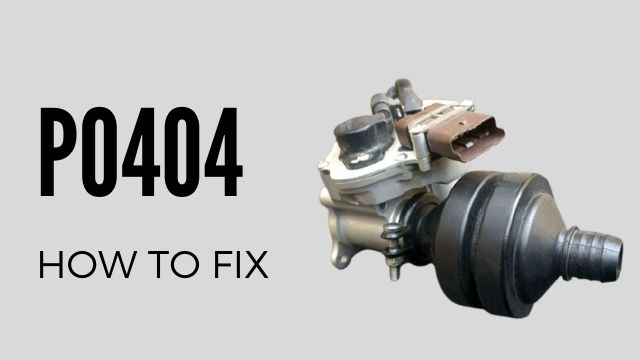 Any failure of components in this system can result in the P0404 code being activated.

It is critical to be diligent when troubleshooting the P0404 Buick Regal Error Code. Apart from the EGR valve, other components could also cause the error. The most frequently cited causes are the wiring, the sensor, or other electronic parts.

Is your Buick Regal showing a P0404 code? Consider the following troubleshooting tips.

In a Buick Regal, the error code P0404 shows that the EGR valve is not performing normally.

Your vehicle is equipped with an Exhaust Gas Recirculation (EGR) System, the primary purpose of which is to recirculate exhaust back into the cylinders, thereby lowering cylinder temperatures and nitrogen oxide emissions.

To determine whether your EGR valve is performing properly, the feedback system of the EGR valve communicates with your Power Control Module (PCM), informing it whether the valve is open, closed, or partially closed at any given time.

When P0404 is triggered, it indicates that the PCM has received information that the valve is operating outside of its prescribed parameters. More precisely, the PCM has been instructed to close the valve while it should be open, or vice versa.

The PCM monitors the valve’s state via the EGR to determine whether it is fully open, partially open, or totally closed.

The P0404 code error occurs when the EGR does not operate properly. Apart from the valve, not opening, there are additional causes for this code to appear.

The procedure for fixing the P0404 error code is vehicle and engine-specific.

Code P0404 typically indicates a carbon build-up in the lines, or in some cases, a faulty EGR valve.

There is no method to prevent carbon build-up because it occurs naturally over time, but if you are experiencing this fault prematurely, the following are likely causes:

If you have the proper tools, fixing the P0404 error is a breeze. To verify the information of the P0404 code, you’ll need a reliable automotive scanner. You need to recognize the conditions resulting in the P0404 error code. This is accomplished by inspecting the frame data.

You can alter the error code and attempt to reproduce the issue by performing a test run. If the problem is carbon fragments obstructing the valve, they frequently dislodge on their own. If carbon is detected in the valve, you can aim to eliminate it.

Occasionally, the EGR sensor is to blame for a P0404 code. The engine’s combustion data should confirm this.

You may choose to visually inspect the valve for evidence of carbon buildup or the right valve position. Contrast the valve’s position with the one displayed on the scanner. If the position matches, the valve will operate normally.

Additionally, you may wish to inspect the wiring surrounding your valve. If you can see corrosion, then replace them. Following that, you should use a voltmeter to check the voltage of the valve as it travels. If nothing changes, there is a short that needs to be repaired.

If no problems with the EGR valve, connectors, or wiring are discovered, you should replace the EGR sensor. Contact a professional if this method does not help. The issue could be an electrical issue with your entire vehicle, which only a mechanic can diagnose and repair.

Change your EGR valves only after a total inspection of the wires and connectors. Wiring issues are a frequent source of the P0404 error code that is frequently neglected.

Where is the location of the EGR sensor?

The EGR valve is located to the intake manifold of the vehicles’ engine with a tube that connects to the exhaust manifold. You can detect this at the engine top near the carburetor.

The cost to fix the P0404 Buick Regal Error Code depends upon your vehicle model and the type of engine. The cost also varies on the location of your repair shop.

First, it is suggested to try the above methods to fix the error. If it fails, then take professional assistance.

You can remove any carbon buildup that may be preventing the EGR valve from properly opening and closing. If the valve or sensor is out of place, you can use a scan tool to open and close the EGR valve.

You may try to relocate the EGR sensor. Following a diagnostic, you should be able to establish the percentage by which the sensor is misaligned.

Are Car Batteries AC or DC?
Who Is The Largest Tire Manufacturer?
What Causes a Transmission to Get Stuck in Gear
What Does "L" Mean On A Car's Gear Shift?