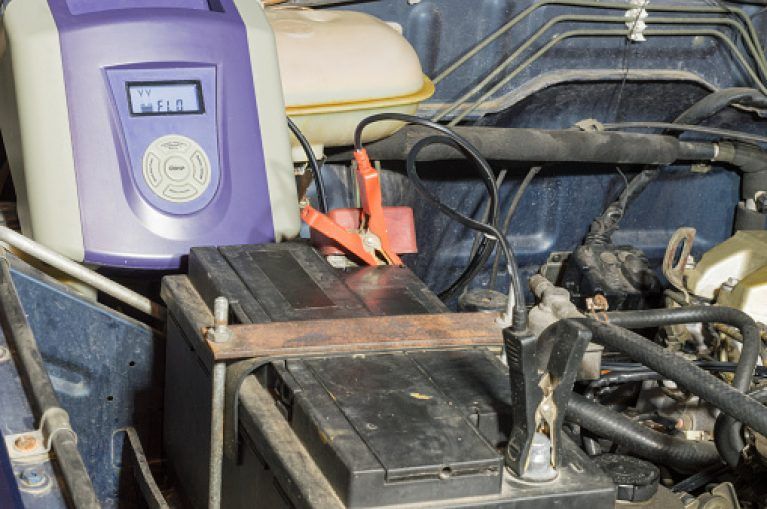 In times when the vehicle is stationary for a long time, the battery can be discharged and even seriously damaged. To avoid this, there are car battery chargers. You only need a plug and your battery will be recovering charge as if it were a cell phone.

The problem with these devices is that there are many models and not all of them are suitable for every situation.

If your vehicle battery is dead, you need to know how long it will take to fully charge. A dead vehicle battery typically takes 4 to 11 hours to charge with a 10 amp charger.

A battery is discharged by supplying electrical energy to the car’s engine and electrical consumers and is recharged through the running alternator.

Short circuit in the electrical system

When a short circuit occurs, a large amount of current is drawn from the battery in a short period of time and converted to heat.

Car lights consume a lot of power and should be turned off while the vehicle is parked.

If the auxiliary heating is not turned off, the battery will be completely drained. This can also occur if the battery is too small.

If the alternator does not charge the battery while driving, the control units and other electrical equipment will be powered only from the battery until the battery is completely drained.

If the alternator regulator fails, a total drain will occur as a result of insufficient battery charging or overcharging.

Failure of a control unit

If the control units are not switched off when the engine is shut down, the battery will be completely discharged.

Additional electrical equipment, such as the seat heating system, often draws power from the cigarette lighter connection, causing the battery to discharge quickly.

To avoid reducing the service life of a defective battery, it should always be replaced with another of the same type.

On short journeys, the amount of electricity used exceeds the capacity of the alternator. It is, therefore, better not to use superfluous equipment (seat heater, radio, etc.).

Radios, GPS systems, and other entertainment devices consume a lot of energy and drain the battery completely if they are not properly recharged.

How Long Does It Take to Charge a Car Battery?

It takes 4 to 11 hours to fully charge the car battery with a 10 amp charger. If you use a 2 amp charger, it will take 2 to 4 days to charge the battery.

Please note that if any charging method fails, the battery may be damaged and will need to be replaced.

A 2 amp charger is appropriate if you want to connect the car to the charger for a long period of time. With a 2 amp charger, it can take 24 hours to 2 days to fully charge the car battery.

It will take about 12 hours to fully charge the vehicle battery if it is charged with a 4 amp charger. Consequently, if you need a fast charger, a 4 amp charger is not an option. This charger, on the other hand, is ideal for smaller batteries.

The correct answer is 9 hours. Based on a 54 amp capacity battery at a 100% discharge rate.

If you use a battery charger, it will take 4 to 11 hours to fully charge the battery with a 10 amp charger.

The number of times will double if the battery is fully discharged. It is not a good idea to use such a large charger.

A 30 amp charger can charge a 50% discharged small vehicle battery in about 1 hour.

At 40 amps, the charging time of a car battery should not exceed 2 hours. Fast charging car batteries is dangerous and should be avoided at all costs.

A partially depleted battery can be charged in 45 minutes with a 50 amp charger. For vehicle batteries, do not use such a large charger.

How Long Does It Take to Charge a Car Battery While Driving?

The alternator is responsible for charging your car’s battery. The battery will charge faster if you keep the engine revolutions high.

If you are traveling on the highway, you should be able to charge your vehicle’s battery in 30 minutes. If you are driving in the city, it may take an hour or more.

How Long Does It Take for a Car Battery to Charge with a Trickle Charger?

Trickle charging is a common method used by owners and drivers of motorcycles, off-road vehicles, and recreational vehicles (RV).

The operating current of the slow charger is approximately 2 amps, so it takes 24 to 48 hours to charge a 12-volt automotive battery.

How Long Does It Take to Charge a Dead Car Battery

Charging a dead vehicle battery takes at least 4 hours and can take up to 24 hours, depending on the power of the charger and the size of the battery.

The good news is that it is not necessary to fully charge the battery before you can start the vehicle. In an emergency, charge it for about 1 hour with a regular charger to get adequate power.

What to Keep in Mind When Buying a Car Battery Charger

There are many features that distinguish one charger from another. Below, we will go over each of them, with the understanding that this is where you can compare battery chargers on the market.

Output power of the charger

You should choose a charger with the same power output as your battery. You should look for the number that corresponds to the Amperes per Hour (Ah), which will appear on your battery. The charger you buy should have the same amount of Ah.

You should know the type of battery your vehicle uses, as there are many different types, such as lithium batteries, calcium-alloy batteries, wet cell batteries, lead-acid batteries, gel batteries, AGM batteries, and many more. To purchase a suitable charger, you must first determine the condition of your car battery.

There are 6 V and 12 V chargers. The latter are the most common in the latest versions and also the best, as they charge the battery in less time.

Capacity to serve as starter

Batteries that rely on high amperage are often used to jump-start the battery when it is nearing the end of its useful life. When we buy one with these characteristics, we are acquiring a “two-in-one”: battery and jump starter.

Although it does not greatly influence its main function, having a battery charger that we can store or carry anywhere will be much more convenient. Older versions are very robust and large, while modern versions are usually much smaller.

Consider all these factors before buying the most suitable charger for your situation.

How To Connect A Car Battery Charger

How to Use a Car Battery Charger

Although the numerous applications and features of many battery chargers today may make their operation more complex, the basic procedure for setting up a vehicle battery charger is generally the same:

Final Thoughts – How to Charge a Car Battery

A 10-amp charger takes between 4 and 11 hours to charge a depleted vehicle battery. The trickle charger is the most recommended of the three chargers, as it prevents overcharging the vehicle’s battery. If you use a 2 amp charger, it will take 2 to 4 days to fully charge your vehicle’s battery.

How to Test Alternator by Disconnecting Battery?
How to Gravity Bleed Brakes Alone
How To Tell If Clutch Is Slipping
How to Paint Rims Black Matte