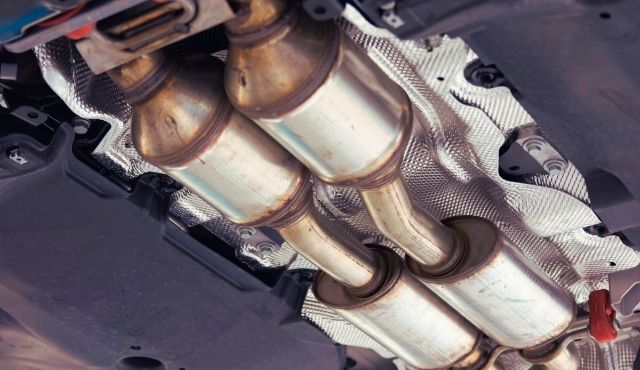 Also, you will learn how to fix it without having to replace it, or if that’s even an available option.

What Is A Catalytic Converter?

It’s both essential and expensive, but your car needs it to work properly. The main purpose of that component is to clean toxic emissions, and it can do it by turning them into carbon dioxide, as well as nitrogen and water vapor.

Those dangerous emissions are the result of engine combustion, so they are a vital effect of the process. Due to a catalytic converter, the effects can be reduced. The converter uses metals like palladium and platinum to change these toxins into safer gasses before they come out of the tailpipe.

How To Tell When The Converter Has Problems?

There are several signs that will let you know when the catalytic converter is failing, but those issues may not be bad enough to require replacement. It could simply be that it is dirty.

Hence it is necessary to know the differences in symptoms that can indicate your converter needs replacement instead of cleaning. The most common signs are:

Pay attention to the sounds your car is making, as that could tell you a lot about the issues your vehicle has. For instance, the sound coming from the converter rattling is one of the most important ones.

This sound is caused because the metal on the inside starts breaking off from the converter’s filtering system, and as they begin to crumble, they start rattling.

If there is a change in the way the catalytic converter looks, take it as a certain sign that it needs to be replaced. Discoloration means it has an internal leak or it is a sign of overheating.

Another sign that the converter might be failing, is a sulfur smell, which typically happens because the component can’t convert the toxins into less harmful elements.

This smell is very similar to rotten eggs, and you will notice it around the exhaust.

When the catalytic converter is failing, the gasses won’t be released fast enough, meaning the engine is going to choke. This will cause an efficiency decrease, and thereby, it will affect the car’s performance.

A certain way to identify a failing catalytic converter is by the reduction of gas mileage. It can occur because the fuel to air ratio is altered when the exhaust pushes various toxins back into the engine.

Ways To Fix A Catalytic Converter Instead Of Replacing It

You can do different things to solve catalytic converter problems without repairing it a lot or replacing it.  Take a look at the following things:

By using a fuel additive every now and then, it will help boost the engine’s performance and also clean the converter. This method is aimed at those who use regular gasoline as an alternative to premium or super-premium, as those are more expensive.

Additionally, those who are dealing with engine issues can also try to use premium or super-premium gas for a while to check if that helps the vehicle’s performance.

All you need to do is to take it out and pressure wash every part of the junk that has accumulated inside the component. You will have to clean both the front and back to remove all of it.

To get a deep clean, soak the part using standard laundry detergent. Make sure you use something that can cut through the grease build-up. After that, power wash it and then dry it completely so you can reinstall it.

The correct temperature goes from 800 Fahrenheit to 1,832 degrees. However, the issue that many people have is that they never drive a vehicle this hard. They generally drive at slower speeds.

If you do that, it can make the catalytic converter fail because it never works with the optimal temperature to do its job. Our advice is to drive hard, push the vehicle to its limit for a few miles.

Then, take the vehicle to an open road and accelerate fast. Run it at its maximum speed, and then take your foot off the gas before pressing it again. Repeat it several times.

Reasons Why You Shouldn’T Replace The Catalytic Converter

Replacing a catalytic converter will not be cheap, and is mostly done on old cars. The cost might shock you, and this is why we recommend you follow the list of advice we brought for you today.

Keep in mind that if you are thinking about replacing the component, it could cost just as much as your current vehicle, or even more if you have an older model. So, if you plan to sell your car, fixing the converter will be the wisest choice.

Nonetheless, if your car is worth more than the catalytic converter, it would be a good idea to replace it. By doing this, you won’t have a hard time selling a newer vehicle, which can’t properly pass the emission test, an exam that every car must pass in order to be used.