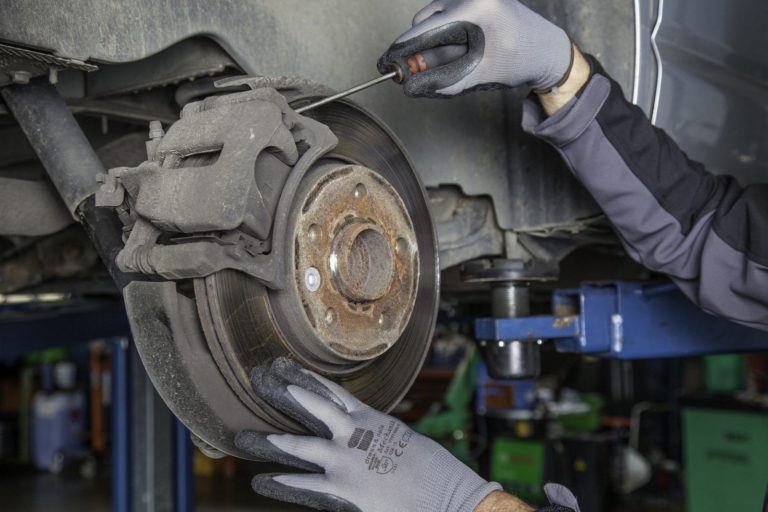 This exercise should be done when necessary, either for failure or for prevention, in case of replacement of some element, or when the circuit is opened for any repair.

There are different methods for bleeding the brakes, some of them very advanced, such as those using pressure devices or other types, although these testing systems are usually carried out at dealers or workshops specializing in brakes. The method that is still widely used is to apply pressure to the brake pedal.

To perform the task, assuming that we can not access a pit that is the ideal place, the first thing we must do is place the car in a safe place, on a flat surface, sometimes depending on the vehicle will be necessary to lift the wheels with a hydraulic jack or with the mechanical jack. In these cases, we must apply the hand brake, and for greater safety, secure the wheels with wooden or hard plastic blocks.

1- First remove the rubber protection covering the bleed screw of the pump. Insert in the screw a transparent plastic tube, the other end of the turbo immerse it in a container (can be a big bottle) containing clean brake fluid.

2- Loosen the screw with an appropriate open end wrench. Then press the pedal (the other person) so that it descends quickly and rises slowly, carrying out this operation several times until the liquid flows through the turbo without bubbles; then, with the pedal fully pressed, tighten the bleeder screw.

3- Repeat the operation on the four wheels respecting the order previously recommended, checking in each of them that the tank is full so that no air enters the pipes. Once the operation is finished, fill the tank to the indicated level.

4- If the circuit has been completely overhauled or it is necessary to change the brake fluid (this should be done every two years), it is advisable to empty the circuit, starting with the tank, by drawing up the fluid with a syringe or something similar. Fill the reservoir with new fluid and open the bleed screws letting the old fluid out until the new fluid is seen to come out (it will be clearer). Then close the bleed screws with the pedal fully depressed and carry out wheel-to-wheel brake bleeding as described above.

On cars equipped with anti-lock brakes the brake bleeding is carried out in the same way. Just keep in mind that any repairs made to the ABS “hydro group” will result in bleeding the ABS.

In the brake system we can have two problems. One is the so-called “fading” (fatigue) which is the momentary loss of the brakes due to excessive temperature in the same (due to excessive abuse). This problem manifests itself with an unexpected hardness in the brake pedal that forces us to operate it with more force than normal to achieve effective braking.

This problem disappears when the brakes cool down. The other drawback of the brakes is called “Vapor lock” (steam trap), in this case, the problem is manifested with a “spongy” brake pedal feel (it sinks easily) without getting the brakes to do their job. This problem if it has to do with the brake fluid and this is because the heat generated by the brake pads in their friction with the disc (or tapes of brake drums), is transmitted to the brake fluid that is overheated, vaporizing and generating vapor bubbles.

The appearance of the bubbles produces an effect similar to if the brake circuit contains air so that the brake fluid would be compressible and would not transmit all the force we do with the pedal on the brake pads or tapes. The “vapor lock” problem is worse than the “fading” problem since the latter is solved only by cooling the brakes (except in extreme cases), while the former has no solution unless the brake fluid is bled.

The quality of the brake fluid

To avoid the value trap in the brake system, we have to look for the right brake fluid, mostly based on polyglycol (a special alcohol) which has among its characteristics a boiling point as high as possible. The classification of the brake fluid is done by means of the designation “DOT” followed by a number. This acronym comes from the U.S. Department of Transportation.

The most commonly used are DOT 3, DOT 4, DOT 5, DOT 5.1 The latter has the highest boiling point value, therefore in this aspect it is the best. The disadvantage of DOT 5 and 5.1 is that they have a much lower viscosity than the other two, which can cause in certain circumstances and with this viscosity, the brake circuit to leak, for example in the cylinders. Therefore, the use of this fluid (DOT 5 and 5.1), must be recommended by the vehicle manufacturer. It goes without saying that the fluid must be of the highest possible quality.

There are a variety of brake fluids on the market, and the best one must be chosen. A good sign is to buy a brand name fluid. The most recommended brake fluid is DOT 4, because it has a higher boiling point than DOT 3, for a similar viscosity between the two. There are even brake fluids based on silicones or mineral oils, but they are only suitable for a few car models and this is indicated in the owner’s manual.