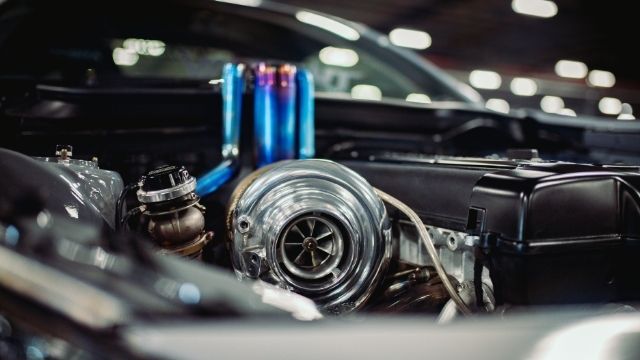 Modern and coming-of-age vehicles launch with turbocharged engines. Earlier, only high load-carrying trucks came with a built-in turbo engine. Now that even the cars with a four-cylinder engine are coming with turbo engines, the raging need and popularity are evident in the automobile sector.

However, it is essential to understand what exactly is a turbocharged engine, its working mechanism, and how much horsepower does it add? Read through for the answers.

What Is A Turbocharger, And Why Is It Essential For Your Car?

We know this definition is too hard, so let us explain the work in simple terms. In technical terms, a turbocharger is an engine that follows a forced induction process, unlike a naturally aspirated engine that works on a natural airflow process.

A regular 4-stroke engine contains a piston, crankshaft, and connecting rod. A fuel delivery system is required to burn the fuel, and this system consists of- an intake manifold, valve, fuel injector, and spark plugs.

Atmospheric air enters naturally into the cylinder via the intake valve, and the fuel injectors inject the fuel-making an air-fuel mixture. The mixture is compressed, combustion takes place with the help of spark plugs, and the air-fuel mixture expands.

The exhaust gases or waste gases are discharged outside. Half of the energy produced in a naturally aspirated engine is wasted in the atmosphere, so a turbocharger is used.

A turbocharger increases the engine’s power and efficiency, generating more horsepower than a standard engine. It utilizes two blades- a turbine and a compression blade joined with a shaft.

Because of this connection, turbine and compression blades move from the exhaust gases together. The air is compressed and moves into the cylinder, from where it further moves towards the engine after cooling. That is how it helps in reducing power and increasing fuel efficiency.

Why Would You Replace A Natural Engine With A Turbocharger?

You will find a turbo under the hood, connected near a naturally aspirated engine. Now that you know about its working look at some of its benefits for your car-

Despite the benefits, a turbocharged engine requires more maintenance and is expensive. It is less reliable than stock engines because of the induction process, and therefore, your car can drive up to a specific kilometer range.

In Detailed Information About The Horsepower Of A Turbo Engine

We’re discussing the amount of horsepower attainted from a turbo. There is no exact number that you will get on the internet regarding the power output of a turbocharged engine. However, you can rely on us for an easy peasy solution.

The amount of efficiency a turbocharger produces depends on some factors, and the model of the car you’re using is one of them. Power will increase by about 40% roughly. An increase or decrease in power will solely depend on your internal system.

You can achieve more power if you pair the engine with an upgraded system. For example, changing the exhaust system will deliver a 70-150 HP horsepower coupled with a turbocharger.

What Are A Turbo Boost And A Turbo Lag?

You know that a turbo engine works when air is forced inside the cylinder for working. Engineers are working towards adding more power with the help of a turbo engine, and so, instead of increasing the size of the cylinder, they’re forcing more air into the system. This forced induction of air is known as a ‘boost’, which is what a supercharger does to increase horsepower.

Increasing boost and power output will cause the engine to drain faster, and hence, there is a turbo lag in the machine. It shortens the engine’s lifespan making it less reliable than a stock engine.

A turbocharged engine won’t function properly at a low RPM, and it will feel like a naturally aspirated engine. You will have to increase the RPM for a turbo boost.

How To Reduce The Lag?

A turbo engine will work if it receives a maximum boost. But as discussed, a situation of turbo lag will appear if overstress is applied to the engine. You can follow these points for prevention.

Removing turbo lag comes with many upgrades like a piston, crankshaft, and other stock engine components with unique counterparts. When these components are used with a fuel injector and larger turbocharger, the output received is bigger. With this update, the horsepower attained is tenfold compared to the standard turbocharged engine.

What Is The Average Rpm At Which A Turbocharger Would Perform?

A turbocharger works when the engine achieves the maximum turbo boost. For that, approximately 2000RPM is sufficient to kickstart a turbo engine.

RPM that it requires depends on the size of the turbine installed inside the turbo system. The larger the turbine, the higher the RPM, and hence, A turbo will obtain more efficiency.

You know about the amount of horsepower required to run a turbocharged vehicle. Turbochargers increase fuel efficiency and horsepower by 40-50%. If proper upgrades are made inside the fuel delivery system, the car will witness 100% efficiency.

There are some drawbacks like turbo lag and lesser duration of the engine. However, you will still get more power output than a stock engine. Even SUV variants are coupled with turbos near their naturally aspirated engines because of this particular reason.

If you wish for better driving quality, try to upgrade your system for more horsepower. We hope this blog was helpful!