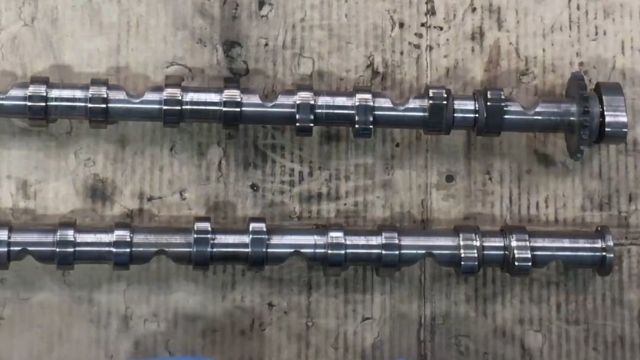 Building a new engine from scratch or replacing the damaged parts may allow you to explore some parts and components that can improve the vehicle’s performance. One of these is the camshaft which helps to make the engine run. It also affects the power of the engine directly.

How Much Boost Can The Camshaft Provide?

There are some camshafts specifically designed to boost the performance of engines. Also, every company recommends a particular combination for their vehicles that provides optimum output without damaging the system.

Camshafts have unique designs that can boost the performance of the engine. The engine can get more power and speed if the valves remain open longer, which is what a good camshaft can do.

But it alone cannot boost the horsepower of the engine. The other components must be compatible and work as well. So if you want more power, you may have to change the camshaft and a few other components.

What Is The Significance Of Camshaft?

Camshaft may be located in different parts of the engine depending on the vehicle model, but mostly it is on top of the engine. It is significant as it facilitates the valve operations of the engine.

Air and fuel mixture must enter the engine so that the movement continues and car drives and this action of closing and opening valves allows their entry. Each valve has one cam controlling its opening and closing, and a vehicle may have two or four cams.

The Mechanism Of The Camshaft

The cams are located in the engine and rotate in a fixed pattern. The camshaft converts this movement into an up and down motion, and all the engine parts move accordingly. These parts include the valve and components like the valve lifter, spring, arm, and tappet.

A car with more cams will allow more air-fuel mixture into the engine and improve its functions or operation. A four-shaft configuration will have more valves, and the engine will get more power. This is why people decide to replace the original camshaft system with a better and more powerful one with more cams.

How Much More Horsepower Can You Get If You Change The Camshaft?

You know now that the camshaft controls the valves, and engines can function more efficiently with a better camshaft. Valves will open for a longer duration with better support from the camshaft and yet won’t lose the rhythm of movement. The components must be in sync with each other and with time.

Are you wondering how all this technical jargon improves the engine’s horsepower? So the longer duration of open valves means the engine is getting a better blend of fuel and air. This means that the engine can perform better, last longer, save fuel and deliver more power or horsepower.

Another big advantage of a better camshaft is that the exhaust system also works more efficiently with it. The emissions happen more easily as the air is not trapped anywhere due to the strong movement of the engine.

The Camshafts And Crankshafts Together Provide More Power To The Engine

These two significant parts of the vehicle are on two sides of the engine, but they provide more power by working together. The two shafts are connected with a timing chain in the engine. Then the two components work together seamlessly as the camshaft converts the rotation to an up and down motion.

The crankshaft executes the exact opposite action, and the two keep all the parts of the engine and car moving. The crankshaft helps to translate its movements into rotation. This movement is facilitated with the force of the piston. The rotation happens due to the crankshaft rotates the wheels, and the engine runs.

Without getting into complex terms, we can see that these two parts help fuel combustion in the engine. The fuel and air go in and compress inside the engine. Due to this compression, the piston is forced, and the crankshaft turns. All the by-products are emitted through the exhaust when the engine moves, with these steps constantly being repeated.

For every camshaft turn, the combustion cycle leads to two crankshaft revolutions. This action must be in sync and timed perfectly.

You can boost the horsepower by replacing the camshaft with a better one. But then the horsepower may increase a lot more if you spend money in replacing the following too.  This is important as only one part alone cannot guarantee better performance and all of them are equally important.

● Timing chain between the shafts.

● Replace the exhaust system- including the muffler and pipe

● Changing the camshaft with more cams.

All these components can help increase the vehicle’s horsepower, but they all work together. Only one part won’t work in isolation. Camshaft alone will not be able to provide the desired boost to the engine if the other parts do not function efficiently.

In theory, a specially designed camshaft can significantly boost the engine’s horsepower. It can change the timing of the valve, and the engine may get even up to 50 or 100 hp extra if the new camshaft is really good.

One example is a vehicle where you have a 300 hp cam. If all the components are superior and can function more efficiently, you can replace the camshaft that provides that kind of horsepower. The total output may increase to 400 hp.

All the camshafts and components may not be this efficient, so choose the parts carefully after finding their compatibility.

It is an excellent idea to boost the engine’s horsepower by swapping the stock camshaft. Car enthusiasts like to add these specially designed camshafts and improve the performance and efficiency of the vehicle.

However, it would be best if you remembered that it is an investment in the car’s performance that may need more parts to be changed too. Think it over carefully, plan a budget, and then boost the torque and horsepower of your car.