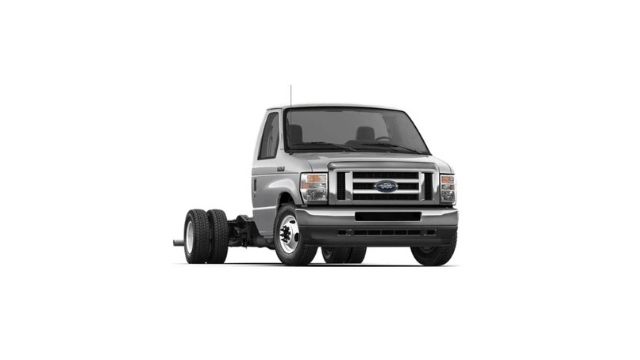 Ford has created thousands of vehicles, but we are going to focus on the E450 Cutaway Truck. Check out our review, where we will talk about the most important components of the truck.

This vehicle is a beast that is able to carry huge loads, and it can do it due to the magnificent V8 engine and its Torqshift transmission system. The engine of the truck produces up to 350 and 568 of torque when using 3,900 RPM.

It is extremely tough, meaning it can hold up to 14,000 pounds. But this will depend on the type of engine that was installed. You can find two models; the first one comes with a premium engine, meanwhile, the second choice incorporates an economy-rated engine.

Both versions have a similar valve design and variable-cam timing. The design assists the engine in optimizing power across the powerband. If the truck receives the correct maintenance, you can use it for 250,000 to 300,000 miles.

Nonetheless, if you abuse the truck’s capacities and you don’t visit a mechanic, then the vehicle will not resist that many miles, and it could fail after reaching 100,000.

Let’s start with the components.

If you want to buy a Ford E450 Cutaway truck for play or work, you should know that it offers you the possibility of choosing. It is available in 158 and 176 inches, and conveniently enough, it doesn’t matter which version you choose, they have the same dimensions on the outside:

When we talk about the interior, we have to mention the truck’s ability to suit your needs by having seats for 2 or 1 guest in the front. However, the newest Ford E450 is the right choice for working, because it presents features that combined with a cozy design, will provide you with easy control of the instruments.

In addition, it has a multifunctional console with extra storage for you to organize your documents a lot better.

Back in 2008, Ford’s E-Series received an improved chassis. The company modified other components such as:

Thanks to a redesigned front suspension and new stability, drivers will have a smoother driving experience. Following these modifications, Ford improved the electronic power-assisted steering too.

Another feature that drivers will love is the low-speed maneuvers. While driving at high speeds, the steering weights will provide a feeling of safety on the road.

Extra security is another of its features. The truck is equipped with airbags for a driver and the passenger, an advanced roll stability control, and a monitoring system for the tire pressure.

A truck like the Ford E450 Cutaway needs the right engine. Ford really excelled on this one, and they added an II/III/IV trailer tow package with an electric brake controller that has a tap-in capability, and a total of seven-pin trailer which includes bumper brackets.

Engine specifications can be found below:

It is also available with a choice of 5-speeds with automated TorqShift and a tow-haul mode.

Most of the Ford E450 Cutaway trucks share the following specifications:

Like any other Ford vehicle, the Ford E450 Cutaway Trucks are successful among Ford enthusiasts. One of the most compelling aspects of these trucks is both the V8 and V10 engines.

They are more than powerful to respond effectively in demanding situations. . Next, with the ride and handling, it’s going to be easier for the drivers to take their trucks out for long rides.

We really can’t say anything else about these fantastic vehicles that Ford continues presenting to the world. But what we can say is that anyone who gives an E450 Cutaway Truck a try, will not regret it.

Mercedes-Benz C Class vs. Mercedes-Benz S Class: A Comparison with Differences
What Can Cause Your RPM To Fluctuate
Does Running the AC Use Coolant?
Chevy Sonic Error Code 82- Meaning & Fix