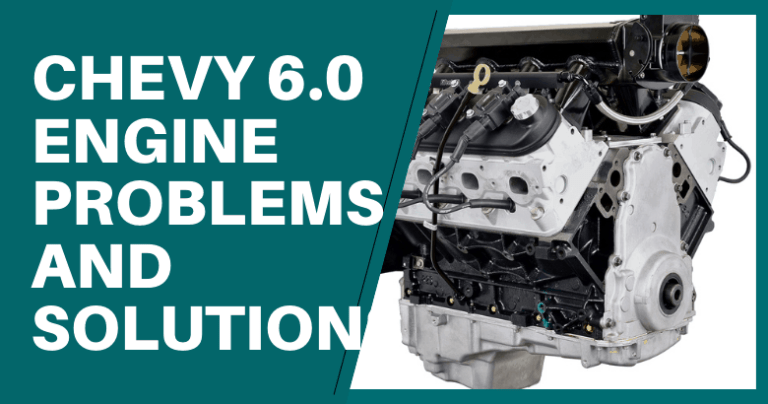 If your Chevy truck is equipped with a 6.0 Vortec engine, you may have encountered certain Chevy 6.0 engine problems on a regular basis. In 2010, Chevrolet debuted the 6.0-liter V8 engine, which was known for its reliability and ability to handle heavy-duty driving.

There are certain technical problems with the engine that are more or less typical of any other vehicle engine, but there are others that are unique to the engine.

Having certain problems does not necessarily mean that the engine is of poor quality, but it shows that the engine needs regular care and attention to function properly.

Fixing these problems can be difficult and time-consuming if you don’t know where to turn for the necessary information.

The good news is that this article covers some of the most common 6.0 Chevy engine problems, as well as some of the possible causes of these difficulties. When I describe a problem, I also provide a check that you can use to identify and fix the problem.

Below are some common and less common Chevrolet 6.0 engine problems, as well as possible remedies, to help you understand the information needed to diagnose your vehicle.

Essentially, the TPS is a sensor that regulates the airflow directly into the 6.0 Chevy engine. It also impacts the amount of gasoline that can be injected into the engine through the fuel delivery system.

If the TPS fails, the engine will send either too much or too little gasoline into the fuel system, depending on the situation. This can be caused by a number of engine misfires, rough idle, low acceleration or power, unpredictable shifting, and other factors, among others.

There are a variety of reasons why the red ‘low power’ or decreased engine power warning appears on the display. It occurs most often on 6.0 Chevy’s when there is a problem or malfunction in the throttle.

Check that the throttle body wiring is in perfect working order. A scan tool or code reader should be used to look for and read any error codes stored in the vehicle’s computer.

If you are not a professional, consult a mechanic and ask for assistance.

Chevrolet Active Fuel Management is a fuel efficiency technology that reduces the output of 50 engine cylinders in order to improve fuel economy and performance.

It is common for owners who activate their AFM systems to report that the “low oil pressure” warning is activated and oil is burning at an unusually fast rate.

The money saved as a result of the 10% improvement will be used to purchase additional oil and attempt to determine the source of the oil pressure problem you are experiencing.

The pad knock sensor, which is sometimes referred to as the lifter, is located under the intake manifold on a 6.0 Chevrolet.

In order to detect engine vibration and determine if there is any unwanted vibration, such as engine knock, this sensor is necessary.

If you do not hear anything but your car’s check engine light is on, it is possible that a sensor has failed.

Chevrolet’s 6.0 engine is also related to the vehicle’s exhaust system, which is responsible for directing exhaust air through the pipes. When there is a problem with the gasket or adjacent bolts, things don’t work as they should.

There are extraneous air gaps that allow exhaust to escape when it is not intended, indicating the presence of this problem. In addition, you may notice an increase in exhaust noise, which may be accompanied by a substantial increase in engine vibration, as described above.

It is recommended that Chevy 6.0 engine water pumps be changed between 60,000 and 90,000 miles. This is a reasonably predictable time period for the performance of any water pump.

GM engines with 150,000 or more miles on the odometer seem to be particularly susceptible to the problem. It is not unusual for some cars to need two or three new water pumps over their lifetime.

When the engine of a 6.0 Chevy starts after idling for a long period of time, it may make a knocking or popping sound.

The cause of this problem is low oil pressure or clogged oil lines in the engine. It is essential that you drive your vehicle at least two or three times a month if you do not want to have this problem.

It is possible for the 6.0 Chevy engine to fail if there is a mechanical problem with the vehicle. This is a problem that can occur with any type of engine, not just Chevrolet engines.

You may notice more emissions and decreased fuel economy as a result of a possible misfire. There are several other Chevy engines that are affected by this problem as well. If you are experiencing engine problems, contact your dealer or service technician at.

The Chevy 6.0 has a typical life of over 300,000 miles, with a maximum life of around 350,000 miles. That’s not to say these engines can’t go farther; several have in the past and continue to do so in the current generation.

When it comes to any vehicle, the Chevrolet 6.0 engine is the most important component, and it is prone to malfunction over time.

It’s critical to call an experienced technician as soon as possible if you’ve performed all the necessary checks but are still experiencing difficulties after doing so. Make sure your vehicle doesn’t get stuck in traffic, risking your life and the lives of others around you.