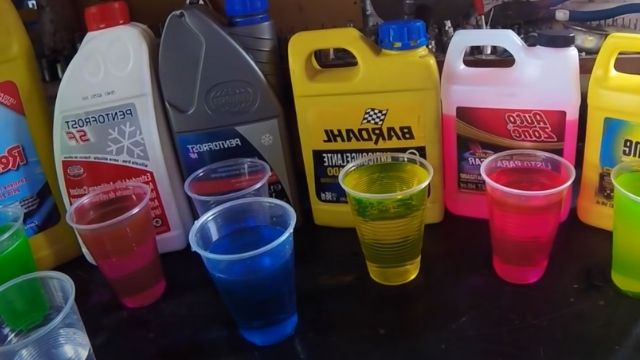 Every car comes with its instruction manual and a clear list of recommended parts and fluids curated by the manufacturer. Why would you even attempt to go against these instructions and mix two or more kinds of fluids?

Antifreeze is a fluid that helps cool the engine and other parts. Different oil companies manufacture these, and over the decades, many new additives and ingredients have been added to make the antifreeze more efficient. There is a variety of coolants available in the market, so it might be a tough task for you to pick the right one.

But it may happen that you don’t have enough of the red antifreeze and need some urgently. The only one available is green. So, can you mix the two? The expert advice is never to do that, and you must avoid mixing such different color fluids even if they both are named antifreeze.

Most vehicle machinery is compatible with a particular set and color of antifreeze, and mixing different colors is never a good option.

Antifreeze colors are significant and indicate certain qualities. The manufacturers design their engines and machinery and then recommend an appropriate coolant. The colors of these fluids are not based on some fancy whim; they denote the qualities and their compatibility with the type of machine.

Green Antifreeze is one of the oldest varieties and has been around for a long. It has the IAT (Inorganic)formula and is compatible with older vehicles. The green coolant may last only for a few years and should not be used for more than three years. It has phosphates to prevent corrosion apart from silicates.

Red Antifreeze uses HOA (organic) technology and is available in different qualities. These are recommended for the Asian manufacturers’ cars and can be used for up to 4 years. It has silicates as one of the ingredients and comes in two varieties.

Blue Antifreeze comes in many different forms apart from their different shades of blue. The basic composition is similar to the red antifreeze. Some blue fluids are meant for Japanese cars and some for other cars.

Orange Antifreeze is the most modern antifreeze. It is compatible with most modern vehicles and with specific cooling systems. It contains additives that prevent the corrosion of aluminum coolant systems. It is recommended for certain American cars.

Gold Antifreeze shines due to the orange color and has anti-rust properties. It is again meant for certain American models of vehicles. The additives make it compatible with steel and certain other materials.

Yellow Antifreeze is another variant that uses the HOA Technology and is recommended for Korean vehicles. It may remain good even for 5 years.

Can You Mix Different Colors Of Antifreeze?

It is never a good idea to mix colors or types of antifreeze. No harmful reactions or explosions will occur, but the coolant may become a combination of chemicals that will not flow properly through the cooling system.

Difference Between Red and Green Antifreeze

Now you know that different antifreeze fluids are not colored due to some fancy ideas, but these colors denote their specific qualities and are meant to differentiate them. Their ingredients and actions are effective against certain mechanisms and materials.

The red antifreeze may remain effective for 4 years before it must be flushed out. But the green one may need to be flushed out even sooner, after three years. The red one not only lasts longer, but it also helps the water pump and cooling systems last longer due to its efficient mechanism.

Green antifreeze is still manufactured as many older vehicles are still around and need it. The old technology behind this antifreeze is already going redundant, and soon it may be out of circulation.

The old car owners use it as it is cheaper compared to all the other varieties. It is thicker and creates a viscous layer inside the coolant system. That prevents leakage from the coolant, which is a good protective mechanism.

People living in colder climates use this green antifreeze due to its thickness too. It also protects its engine and other parts with its antifreeze qualities.

Green antifreeze may need more frequent changes than red antifreeze, which is a cause of concern apart from their ingredients. Even if you accidentally mix the two fluids, it may also damage the coolant system and other engine parts.

The eater jacket may be clogged, or the water pump may be damaged due to conflicting ingredients that cannot work together.

Though both liquids are vicious and may mix sooner or later, their chemicals may also react to each other and change their properties.

Can You Mix Green and Red Antifreeze?

Tips to follow after an accidental mix of red and green antifreeze fluids.

Antifreeze is a coolant and is mandatory for vehicles so that the components do not heat too much. They come in different colors so that we don’t get confused and use the right one recommended for our car.

It is not alright to mix the red and green antifreeze as their cooling properties, ingredients, and life span are completely diverse. If you accidentally mix red and green fluid, that may damage the car parts.

The mixed coolant means it will need repair from a mechanic for the parts. You can drain out the fluids yourself or take his help to do that too. Always use the right antifreeze and ensure that the car runs smoothly.