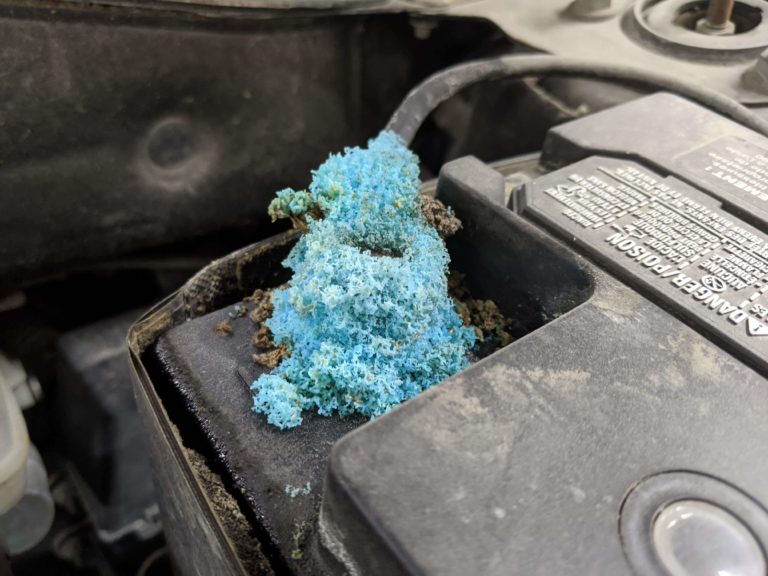 The last thing you would want after going on a long ride on a deserted highway is your car to refuse to start. The second last thing would be for your car electronics to fail you when stuck in a traffic jam. It can be the other way around, but both instances could occur provided you have corrosion in your battery terminals. This is primarily because the car battery feeds the starter, which in turn powers the engine on. Every other electronic system also utilizes the car battery to operate. Hence car battery corrosion will affect your car’s performance in many ways and put you through many hassles.

Dealing with car battery corrosion is hence a very vital thing to learn. But it isn’t as easy as it sounds. Initially, you need to know what causes it and then how to fix them effectively. This article aims at resolving the issue altogether.

What happens due to car battery corrosion?

The terminal ends of a car battery play a very crucial role. They are responsible for connecting the car’s electric appliances to the power source, i.e., car battery. These terminals have highly conductive and heavy-duty metals such as lead attached to them. They also provide a minimum amount of electrical resistance.

Car battery corrosion poses adverse effects on the electrical system of the car. Moreover, it suppresses the power flow of the battery. Consequently, the engine would fail to start up, and the electronic system and car computer might pose multiple problems. The effects of battery corrosion are briefly mentioned below.

The most common and obvious effect of a corroded car battery is a misfiring engine. The corrosion affects the battery terminals adversely and prevents them from conducting electricity properly. This would result in a low transfer of voltage to the starter. In such cases, all our efforts in starting the engine would go in vain. The machine will just not start. Several misfired measures will eventually wear out the starter and warrant an immediate visit to the mechanic.

The car battery controls the car’s transmission system and prepares it for optimal functioning. A majority of cars come equipped with a computerized system managing the transmission and the battery. A corroded battery prevents the transmission from extracting sufficient power from it. This eventually results in intermittent problems such as gear shift delays. A defective transmission can cause misplaced gear transmission and a lot more issues.

The in-car electronics like the e-mirrors, car doors or the sound system are dependent on the car’s battery. They need the battery to provide a sufficient voltage discharge to them. They can get faulty when this doesn’t happen due to a corroded battery and hence break down.

We have provided below the most common causes behind car battery corrosion.

The batteries of your car extract their charges from the internal charging system of the car. Hence it continuously gets charged and discharged. Now each battery has a charging threshold that must be optimally fulfilled. Any disbalance in this aspect, such as the battery being charged below or above the threshold, will cause corrosion. If the battery gets overcharged, the positive terminal will get corroded while undercharging. It will corrode the negative one. If you fail to drive the vehicle properly, instances of charge disbalancing are likely to occur.

Every car battery contains liquid components such as water or sulphuric acid. These liquids facilitate the chemistry within them. Irregular maintenance often causes these liquids to spill from the terminals. This is also caused due to excessive liquid refill. Liquid spillage is a very convenient condition for the battery terminal to start corroding. Lithium-ion batteries are mostly noticed in hybrid cars, commonly developing electrolytic spillage-induced corrosion.

For the proper functioning of a car battery, battery water is very crucial. But its abundance can lead to problems with battery corrosion. Every battery has the highest marker on it, which indicates the maximum level of water it should hold. You must ensure never to cross that marker. Excessive water will come out of the vents and contact the terminals leading to corrosion.

Natural corrosion of the battery terminals is common in old batteries. With regular usage of 5-6 years, car batteries begin to corrode extensively. All the other factors that cause corrosion multiply and the battery fails to sustain a maintainable condition. They become harder to fix and don’t seem to fit the bill anymore. An aging battery has no valuable solution except replacing it with a new one.

The engine of your car is continually heating up and cooling down throughout the day. This releases Hydrogen gas from your batteries. This gas gets trapped under your bonnet and reacts with the terminals of the car batteries. Such extensive reactions result in battery corrosion. The most common way for battery corrosion is through hydrogen discharge. It is mostly seen in electrolytic batteries that use Sulphuric acid.

The corrosion of your car battery terminals is a common problem for car owners. As you have already learned the usual causes and results of it, it’s time you learn a few fixes. They can come in handy and save you time and money from going to the mechanic.

Heavy degree corrosion on copper clamps or the terminals can be very hard to tackle. But using brute force will hardly solve the issue. You can use a solution of soda and water instead. Immerse the clamps and soak them in the soda water solution for around 20 minutes. Alternatively, one can use a soaked towel and place it over the terminals for a similar duration. This would take care of the corrosion removal effectively. It removes copper sulfate deposits on the terminals. Ensure that you remove the battery properly after keeping the ignition off.

Soft drinks or soda available at the common store contain an adequate column of carbonic acid in them. These can be used to remove mild corrosion from the battery terminals. You just have to pour out the soda on the terminals and squeeze a soft sponge to remove the residue. If you do not have a solution of baking soda and water, then this would work just as well.

How can we prevent battery terminal corrosion?

We all acknowledge the fact that prevention is better than cure. Now that you are aware of the cure, let us focus a bit on the prevention.

As it is with all machinery you own, your car batteries also require proper maintenance. Battery corrosion is a natural phenomenon and cannot be avoided in the long run. But it can be delayed through regular maintenance. Never miss a car servicing schedule, and always ensure the battery is operating in good condition.

Improper charging can be an impactful reason for battery terminal corrosion. Any issues of improper charging, both over or under, must be noticed and taken care of at the earliest. You should seek a mechanic’s help and identify the exact reason causing the charge imbalance. Then proceed to eliminate it, saving the battery terminals from corroding.

There are multiple reasons behind battery terminal corrosion of vehicles. Preventing corrosion is possible provided we perform proper maintenance of the car battery through regular inspection. Practices such as overcharging or undercharging the battery or filling excessive water into it can be catastrophic to its health. Preventive measures can help to delay the eventual corrosion that will occur with time. However, the above fixes can repair mild to extreme corrosion, provide your battery still has juice left in it.