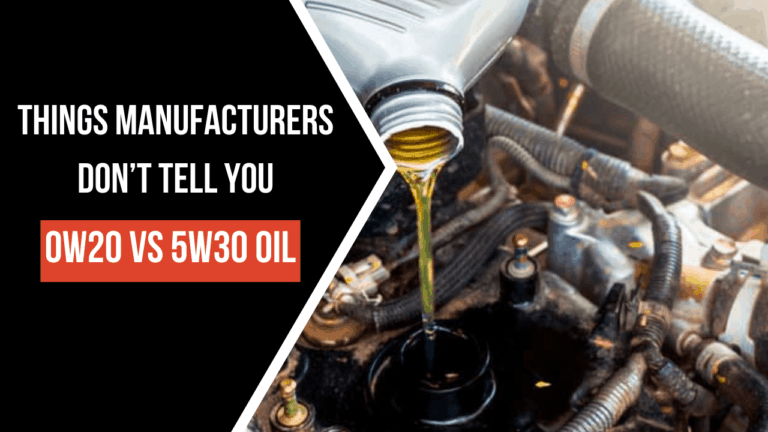 For stable, long-lasting and reliable operation of an automobile engine, it is important to select the right oil for a particular engine and the intended operating conditions. One of the most important criteria for selection is its viscosity-temperature.

These characteristics are marked according to the international viscosity standard for lubricants, which is indicated by SAE. This indicator has nothing to do with the quality of the oil, it only indicates its viscosity at certain temperatures. Depending on this, they issue oils for all seasons, winter and summer.

According to Society of Automotive Engineers (SAE) standards, 0W-20 and 5W-30 are two different grades of motor oil. They perform the same tasks, such as reducing friction between engine parts, reducing wear and keeping the engine clean of sludge and varnish.

So why bother with something that reflects 0W20 and 5W30? Despite some similarities in chemical properties, these oil grades are different. This article will provide you with basic and comparative information about them so you can make an informed decision when buying one for your car.

This is a table showing what separates one grade from another. This table should be useful for advanced users, but beginners will need more complete details.

When evaluating the performance of an oil, several considerations must be taken into account. Among the most critical are:

The first item on the list is fundamental to recognizing engine oil. We will go through them before moving on to the other three items.

There may be figures that reflect viscosity. These figures are more reflective of the efficiency and performance of the engine oil than others. They will help you determine how an oil will perform at a given temperature. As a result, it will ensure that your car’s engine is well lubricated in response to adjusting environmental conditions when in service.

Given the relatively limited scope of use of 0w-20 motor oils, many lubricant manufacturers produce a line of products with a minimum mark in SAE 5w-30. This type of lubricant is much more popular among motorists and has significantly higher sales volumes. The temperature of the oil 5w-30 is in the range from -350C to + 250C , which suggests the possibility of its use in any season. At an engine operating temperature of 1000C, the 5w-30 lubricant has a viscosity of 9.5 mm2/s.

According to the degree of engine wear, 5w-30 brand is recommended for ICE with a degree of wear in the range of 0% to 50% of its service life when recommended by the vehicle manufacturer.

Engine oils, whose SAE label is 0w-20, are all-season products. The specified oil has a minimum viscosity of 5.6 mm2/s at an engine operating temperature 1000C, and is designed to operate at temperatures from – 150C to + 200C. This is evidenced by the first digit “0” (winter index) in the designation characterizing the temperature range, as well as the last number “20” (summer index) indicating the viscosity grade.

In addition, when choosing a lubricant, consider the degree of wear of the engine. According to this criterion, it is recommended to use the brand 0w-20 for engines with a degree of wear not exceeding25-30%of its resource.

When performing a comparative analysis of the characteristics of the two brands of lubricating engine fluids under consideration, the following general characteristics can be distinguished:

Despite the presence of certain similar characteristics, there are a number of significant differences between the products in question. Among them:

Oils 0w-20 and 5w-30 really are neighbors in the lines of manufacturers and cause a lot of questions to motorists about the feasibility and effectiveness of the use of a particular option. Having considered both options in detail and summarizing what has been said, it can be concluded that, from the moment of purchase of the car, it is absolutely necessary to use the oil recommended by the manufacturer. However, it is necessary to make an amendment to the market for which the car was launched.

With an increase in mileage, especially in heavy operating conditions of engines with 0w-20 oil, it is recommended to consider the advisability of increasing its viscosity to 30. The first reason to think about this is an increase in oil consumption, which is likely to be eliminated after replacement.

If the annual mileage of the car is more than 15,000 kilometers and the oil is changed 2 or more times a year, then it is advisable to fill 0w-20 before winter to facilitate starting in cold weather and move from 5w to summer. 30, whose viscosity is hot.

The weather will drop significantly. In addition, experts do not notice any contraindications that would prevent the mixing of oils 0w-20 and 5w-30, provided that they are from the same manufacturer and have other equal characteristics.

However, it should be understood that the considered characteristics of oils are far from the only indicators to which you should pay attention when choosing a lubricating fluid for the engine, so the option should be selected comprehensively.

The discussion will conclude with the answer to a frequently asked question “Can I use 0W-20 when it says 5W-30?” this is a common question among car owners. Although each owner’s manual mentions a certain category of oil, using one instead of the other will not necessarily be detrimental.

Therefore, if only one factor is taken into account, it is difficult to select between these two oils. You must know the environment in which you are working, measure engine life, and examine your usage and driving patterns.