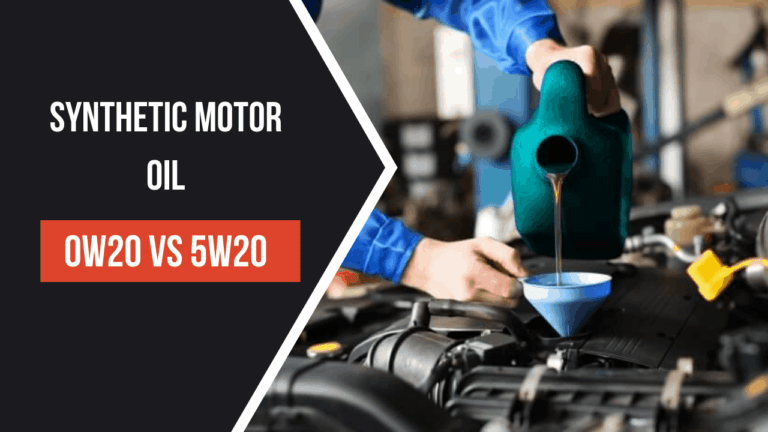 In recent times, we have seen some manufacturers recommending 0W20 oils for their vehicles because of their durability and cold performance. But are these oils suitable for all engines and climatic conditions?

0W20 is a much thinner oil than 5W-20 and is more stable at cold temperatures, which means it flows smoothly through critical engine parts. This is especially beneficial in areas with cold winters, as the oil does not thicken and clog the engine.

The 5W-20 is a thicker viscosity oil and is best for a normal operating temperature range of -22°F to 68°F. However, in extremely cold weather, 5W-20 oil may not flow as smoothly and can cause engine problems.

However, we are talking about oil with specific conditions, even narrow as far as the working temperature range is concerned, so it is convenient to know what we have in our hands before opting for a change.

Read on to learn how to differentiate between 0W20 and 5W20.

The main advantage of 0W20 oil over 5W30 is its viscosity. Or rather, the lack of it.

Let’s remember that in motor oils it is necessary to have a certain viscosity, which is what forms the protective film on the different moving parts of the engine, which translates into greater durability and service life of its components.

However, if the viscosity is high, it also becomes an obstacle for the engine to work, increasing fuel consumption due to greater friction between the engine parts.

If we follow this approach to the letter, we would find that 0W20 oil would produce better lubrication results than 5W30, since its viscosity is somewhat lower.

Some oil manufacturers such as Castrol indicate that 0W20 oil reduces fuel consumption by around 4% compared to 15W40 oil in vehicles using this oil as a reference.

The Problem of Temperature

If we go to the data, a 0W20 oil record operating parameters, as far as temperature is concerned, is considerably more rigid than 5W30 or 5W20.

In this case, the oil would offer a better cold start and better lubrication conditions in environments where temperatures are very low.

In fact, this oil is recommended when starting temperatures fall below -20 degrees, as its recommended parameters range from -10 to -40 degrees.

Something that may be necessary for countries with much colder climates such as Germany or Denmark, but not so much in our environment, to be honest.

The same problem arises when it comes to evaluating the hot operating temperature. In the case of 5W30 oil, we are talking that these recommended temperatures are around 30 degrees, degrading somewhat more when the temperature increases above this level.

This is a problem that increases with 0W20 oils, whose hot temperatures are even lower. This oil increases the level of fluidity of the oil when the temperature rises, which can increase its consumption and deterioration.

Therefore, as far as the ambient temperature is concerned, it is obvious that the conditions are not the most ideal for changing the oil to a 0W20.

So why is it recommended?

These are difficult times for vehicle manufacturers. Pollution standards are becoming increasingly strict and fuel consumption is one of the points on which most work must be done when designing a new vehicle.

This has led to a considerable increase in engine power while reducing cubic capacity, in a sort of inverse formula to the usual one (more cubic capacity = more power) that we do not know how long it will last.

The proof is that today we find engines capable of delivering 95 horsepower with barely one liter of cubic capacity.

This means that engine materials must be increasingly more efficient, with a greater presence of components such as aluminum.

This also requires more efficient lubrication, with high-pressure injectors to achieve a thin and very effective oil film in the engine.

And for this oil to flow effectively through all the elements of this engine, it must have high fluidity, such as that of 0W20.

Something that also helps to reduce internal friction and achieve that small percentage of fuel economy that allows many of these engines to meet the stringent pollution standards we referred to earlier.

Something that is reflected in another element of these complex equations that drive the engine. Specifically, we are talking about the amount of energy required to move this oil.

Since this extremely fluid oil reduces friction and also the pressure required in the oil circuit, by moving in an easier way, there is an energy-saving in this whole lubrication process.

This adds up to a reduction in pollutant emissions and fuel consumption, but without affecting engine performance and protection as established by the new ACEA C5 standard, which is the one that applies to the most modern engines.

The engine oil is therefore fully synthetic. It is specifically manufactured to preserve the engine and, at the same time, keep it safe and tidy.

To improve production, the oil is distilled from a high-quality synthetic oil and uses a particular method of activation of the parts.

The product meets and even exceeds industry production expectations.

The oil does not fatigue easily due to its advanced synthetic formula. And if the temperature is low, it will continue to perform and have excellent engine safety.

If we consider stability and mileage, the advantages of full synthesis become obvious.

Excellent oxidation and stability ensure vehicle safety for at least 10,000 miles until the oil needs to be adjusted.

This substance is recommended for any car with a gasoline engine. When using it, it can be found in SUVs, light trucks, buses, commercial cars, and high-performance turbocharged engines.

Before using motor oil, it is necessary to know whether the engine has viscosity.

However, as the manufacturer indicates, it cannot be used in two-wheeled vehicles or in engines intended for flying airplanes.

Each form of oil has a particular viscosity. The higher the amount in the brand, the thicker the label.

Fluctuations in the price of fuel can lead to increased consumption. The acceptable weight (per temperature) is specified in the car’s owner’s manual.

However, if you detect a valve fluttering sound, return to the recommended valve. Unless you are driving in very hot or cold weather, you should drive in the lane.

To prevent wear, the oil helps maintain engine performance during service. The vehicle owner plays a key role in deciding the engine reliability of the type of oil used.

Before choosing which oil to use, different forms of oils, compatibility, and additives should be considered.

Currently, 0w20 and 5w20 lubricants are suitable for cars in hot and cold environments. Their disparity influences the optimal performance of their work at incredibly high temperatures.